My Ingress to Virtual Reality

They are coming. A scientific experiment called the "Niantic Project," initiated by the National Intelligence Agency (NIA) has discovered that certain points on earth exhibit energy anomalies which influence us humans in unforeseeable ways. It is a mind virus. Utilizing these energy anomalies can assist in building protective fields from outside influence in terms of mind control. The Niantic Project claims that these measures of mind control extending between these points of interest (portals) are subject to the highest scrutiny so as to not be harmful, yet no evidence supporting or disputing the ultimate effect of the energy matter on the human mind has thus far been discovered. All we know thus far is that the energy anomalies center around exhibitions of human aesthetics and creativity – works of art in the form of sculptures, murals, statues, architectural masterpieces, and other landmarks scattered across the world. Now that you have been made aware of the existence of these energy anomalies, it is your choice of whether to join the struggle – but on which side? Join the Enlightened, and you will fight to control the mind fields according to the standards described by the Niantic Project. Join the Resistance, and you will fight to protect your fellow citizens from any form of mind control. Become an agent.

Described above is the basic plot of a closed beta, alternative reality GPS-based game called "Ingress," developed by Google. Yes, I'm an agent, and have been playing the game since its release in November of 2012. I have observed the struggles of my team against the opposing force, battled over portals, and established myself as a distinguished agent on the side of the Resistance in Lincoln. I have seen treaties being made, treaties being broken; I have helped establish agreed-upon standards of conduct (not further established in the game's TOS), and contributed to strategy planning and execution. This is one of my identities. I am a cyborg.

My agent name is clearly gendered, and one that I chose specifically to reveal my sex, but a lot of my fellow (and opposing) agents' aren't. Who am I playing with or against? Who am I to them? I am the name on the screen that just attacked their portal, that forces them to protect their assets against me; I have become embodied in the virtual reality of my agent name, and in the textual (written) information they see about the actions I take. I can choose how often I reveal my physical identity, and to whom; for all others, I will remain embodied in my agent ID. My phone has become my tool and a form of embodiment for myself; my physical presence at a given spot in time (a portal) is revealed through the textual communication of my actions, yet my identity remains a myth. In this sense, then, within the world of Ingress, "the boundary is permeable between tool and myth, instrument and concept, historical systems of social relations and historical anatomies of possible bodies, including objects of knowledge" (Haraway 6). I have joined a force that defines itself precisely by being the Other; the preset hierarchy of knowledge distribution remains (relatively) arbitrary and, more importantly, independent from physicality (in Haraway's sense, gender) because I can remain invisible.

As the Resistance, we have formed a coalition against the Enlightened in a simulation of the historical and political struggle of the margins against the center. Yet, no one clearly seems to be at the center here, since the game functions independently from the idea of what is the 'norm.' It is 'us' versus 'them', but it is also 'them' versus 'us', in a situation in which no clear archetypal preference is lent to either coalition force. In opposition to Sherry Turkle's assertion, then, perhaps the idea of MUDs (or here, ARs) rests not only on the principle that these games are "betwixt and between" reality and virtuality (4), but also on the altered distribution of power in Haraway's sense: there is no centrally established (and predetermined) normative set, at least not per se. In other words, rather than 'only' being lent a sense of escape from the real world (and my real identity, presuming such a thing even exists), and the ability to 'try out' new identities, game play affords me the extension of myself – my physical embodiment, according to Haraway – within a system created solely by marginality. We all become the Other, if only for the reason that we are playing a nerdy game that many people don't even know about. And yet, identities nevertheless remain based on a system of inclusion vs. exclusion from a certain community.

The re-appropriation of power distributions themselves within the game's logic, however, signifies a return to social consciousness in what Turkle would describe as 'real life,' and what Haraway would criticize for this very reason. As Haraway writes, cyborg identities "are about consciousness – or its simulation" (2). What is important here is the re-creation, or perhaps, simulation, of econo-political processes already existing beyond the boundaries of the game. Within the game, these experiences are re-lived, recreated, albeit according to slightly different terms. Walter Benjamin has asserted that "the transformation of the superstructure, which takes place far more slowly than that of the substructure, has taken more than half a century to manifest in all areas of culture the change in the conditions of production" (2). In this sense, then, the alternative reality afforded by virtual gameplay offers the possibility of escape from archetypal prescriptions – most pertinently, those attributed to physicality as they are 'written on the body' – simply because they represent a substructure (the game) rather than cultural, socio-economic, reality. They nevertheless remain inevitably inscripted upon the consciousness of the players.

What I personally find especially interesting in the consideration of the readings assigned for this week in relation to my alternative identity within "Ingress" is that the GPS based nature of the game forces me outside the home – if you may, into public – while in itself veiling my physical identity from outside scrutiny, thus keeping it relatively private. Even further, the portals I need to visit for gameplay are almost exclusively of artistic nature. In this sense, perhaps, "Ingress" provides a venue for further questions into the relationship of the human mind (as it is partially expressed by artistic work) and the body (as it is simultaneously recreated and remains veiled). For now, however, I have to take out a few portals the 'Others' have claimed – the Sheldon art museum, "Archie," and the Lied Center come to mind here. After all, I have the power to protect the world – or, at least, I get to pretend so, regardless of my background. 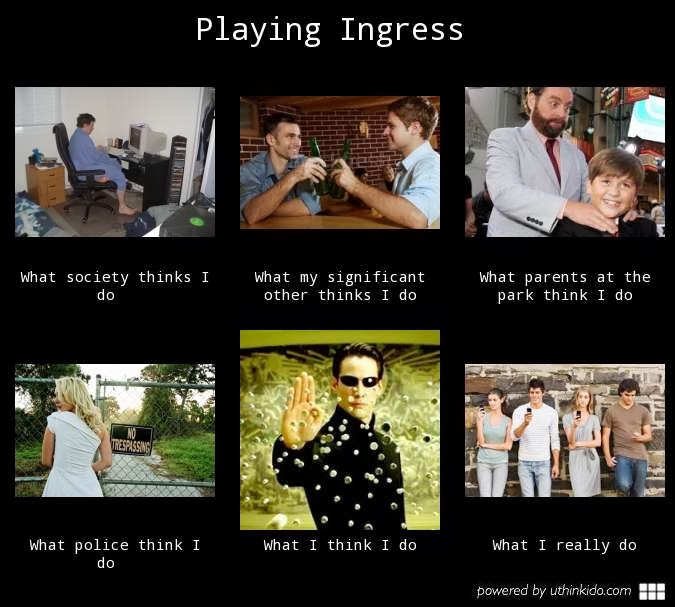